The Northern Territory Government is undertaking a planning study to realign and upgrade Gunn Point Road and determine its connection to Glyde Point in the north and the Stuart Highway in the south.

Donald Cant Watts Corke have been engaged by Tonkin Consulting to carry out Cost Estimating services as part of the planning study, with the objective of the study being to develop concept plans for the road upgrade. This will be delivered in two packages.

The first package of the project is to develop a costed design concept for Gunn Point Road that includes realigning, upgrading and sealing the road to a two-way single carriageway from Howard Springs Road to Gunn Point; $40 million has been committed to deliver this work.

The second package of the project will confirm the alignment of the Glyde Point connector road at the southern and northern end of Gunn Point Road.
The study will consider:

The initiative is driven by the popularity of Gunn Point Road as it is the main access to several popular recreational and fishing destinations close to Darwin and Palmerston including Leaders Creek, the Vernon Islands, Saltwater Arm and the lower Adelaide River.

The existing road was unsealed and in poor condition and prone to corrugations, dust and
wet season closures due to flooding. The new development will provide easy access to the area and allow for the many Territorians and tourists who enjoy spending time in the Gunn Point area to continue camping, hunting and riding off-road and four-wheel drive vehicles.

The road will also provide access to Project Sea Dragon, a $1.45 billion prawn aquaculture project that will generate significant economic and employment opportunities for locals.

Works commenced on Gunn Point Road in August of this year with an expectation for the project to complete in March of 2018. 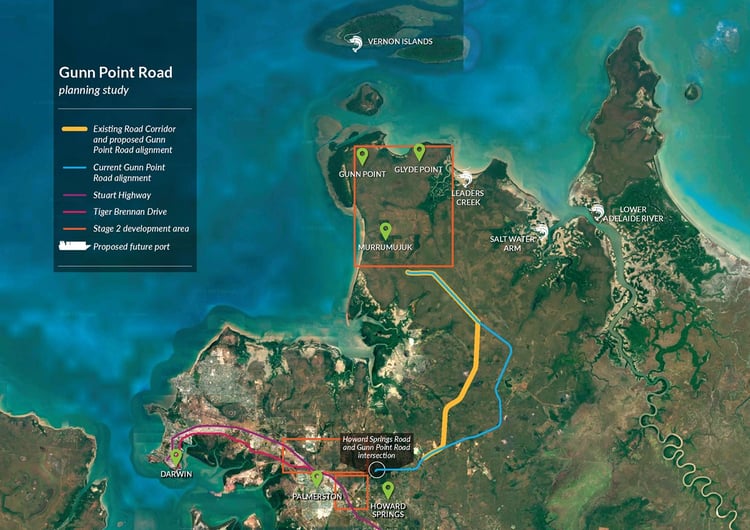 In early 2020, the NT Government, in collaboration with Power and Water Corporation (Power and ...

The Victorian Government announced that it would build the North East Link (NEL) Project comple...

Construction has commenced on Melbourne’s Metro Tunnel. The project will create capacity on the...